In week #19, I introduce you to the brilliant eco-feminist theologian that is Dr. Aruna Gnanadason, from {Chennai, India}. It was an honour to meet her, learn from her wisdom, and adventure with her to the tops of the Alps in Italy. Her beauty comes from within.

"Working for justice is a daunting task in India today.  There is huge global publicity about India being a incredible country; to be one of the fastest growing economies in the world, the producer of generic drugs, of alternative energy sources (we have one of the only fully solar energy powered airports in the world!). But then we have gross levels of poverty; of farmers committing suicide due to indebtedness, of soaring prices that leave the majority of the people with no access. Today millions of people do not have access to clean drinking water, to health, to education." 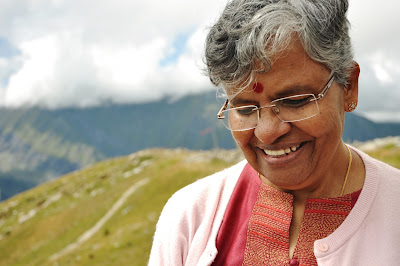 "Added to this we have an Indigenous and religiously sanctioned form of graded subjugation of people, called the caste system. Some 25% of the population of the country are relegated as "outcastes" because they engage in the most degrading and "polluting" tasks, cleaning the toilets, the roads, the drains. These are birth based occupations. Dalits (as they call themselves now) are getting organized and demanding justice for themselves."

"To this, one has to add patriarchy, which is strongly embedded into Indian society - recently dubbed the "rape capital of the world.” Indian women experience the worst forms of discrimination and violence. Working for justice is hard because so often economic structures interplay with caste and patriarchy giving us a complex and difficult agenda."
---
"About 3% of Indians are Christian (that is about a huge number given the population of India which is roughly 1.3 billion!).  But then our minority consciousness strangles us!  Additionally we are a fragmented community, as much of what exists in the society of economic disparity, caste and patriarchy has been infused the churches too! Our theology too is still very much a slave to our colonial past. (There is of course and ecumenical movement and a liberation theology movement particularly Dalit, Indigenous Peoples' and feminist theology posing strong questions to the church.)"

"We do today face some real threats from the Hindu majority (not all Hindus....the majority have lived in harmony with minorities for all our history as a nation.  But a core of Hindu fundamentalists with a huge following have disturbed the equilibrium of the country by claiming that this is a Hindutva (a country for Hindus).  What makes it frightening is that this is the ideology that undergirds the ruling party that is in power - cultural nationalism is a real threat as they try to influence education, the media, the right to propagate one's faith, etc."


---
Tell me something beautiful you have witnessed in your country:
“This story is on going. One of the insidious efforts by the Hindutva ideologues and their followers was to call for a ban on cow slaughter and the eating of beef!  It is based on a conviction that the cow is a sacred symbol in Hinduism. What makes it difficult is that cow slaughter has been for centuries the occupation of Dalits additionally for farmers who depend on rearing cows. Literally thousands will lose their livelihood if this becomes a national law,as is being proposed.  Just a few days ago a Muslim old man was murdered for eating beef!" Additionally it is the cheapest form of protein for millions of Dalit and Indigenous people and Muslims (and many others like me!)."

"It has been amazing the amount of support those opposing the slaughter ban have received from eminent Hindus, journalists and others, who are demanding the rights of Dalits, Muslims and others be given more serious attention than cows! “

"The other good story is a campaign started by a prominent film star Farhan Akthar, called "Men Against Rape and Discrimination"  (MARD), the symbol of which is a moustache!  He has been mobilizing Indian men to think and act against the horrific forms of violence Indian women experience."

Appreciate these stories? Leave a comment with your curiosities!
Posted by Brandi Friesen Thorpe at 09:26